Message to Ashley Bacon Haspel Hayden Lake:  The government authorized EZ button invisible laser beam torture pain is still paining my breast, so, that’s why I’m continuing to post the information for today, to you, to your attention.

…
13  “O you who are dwelling in the gardens,+ the partners are paying attention to your* voice. Let me hear it.”+

14  “Run away, my dear one, and make yourself* like a gazelle or like a young one of the stags upon the mountains of spices.”+

17  Until the day breathes and the shadows have fled, turn around, O my dear one; be like the gazellea or like the young of the stags upon the mountains of separation.*

JW.org, posted here at my website with permission from some of the CIA-DIA-FBI agents who’re pretending to be Jehovah’s Witnesses, cc all Mormon barristers 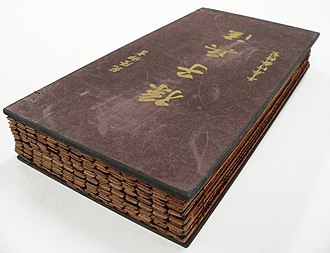 The Art of War is an ancient Chinese military treatise dating from the Late Spring and Autumn Period (roughly 5th century BC). The work, which is attributed to the ancient Chinese military strategist Sun Tzu (“Master Sun”, also spelled Sunzi), is composed of 13 chapters. Each one is devoted to an aspect of warfare and how it applies to military strategy and tactics. For almost 1,500 years it was the lead text in an anthology that would be formalised as the Seven Military Classics by Emperor Shenzong of Song in 1080. The Art of War remains the most influential strategy text in East Asian warfare[1] and has influenced both Eastern and Western military thinking, business tactics, legal strategy and beyond.
Wikipedia
Authors: Mormon CIA Danites/Danettes
Attributed to: Ancient Chinese military strategist
With consent from: Modern day CIA-MSS corporate executives.
cc all Mormon barristers

To Ashley Bacon Haspel Hayden Lake:  When I was walking along Court Street, after I left FedEx yesterday morning, June 29, 2019, I took a picture of a homeless black male on Court Street near at Joralemon Street.  He was wearing raggedly blankets, around his head and his body, the blankets trailing him, like a very long wedding veil.  (I am not lying.) I of course immediately thought of the recent photos of Priyanka Chopra’s incredibly long wedding veil at one of her and Nick Jonas’s two incredibly expensive wedding ceremonies.  How the homeless man managed to stick the filthy dirty tattered raggedy blankets together, I do not know; he probably had help from somebody.  (I do not look down on homeless people; I do not know what their lives would be were it not for the oppression that the book of Psalms speaks so much about. cc Citi, the biggest drug money launderer on the planet.)

I made a mistake when reading about the cost of the wedding ceremonies.  I thought the cost was $53 million (which would not surprise me); however I was mistaken, that’s their net worth.  The cost of their two arranged weddings (one of many propaganda strategies to mind-control “millennials”) was less than one million dollars, only $584,000.

According to the Times of India, the set-up for the Hindu ceremonies (which were to take place at the Mehrangarh Fort, but were moved for security reasons) cost an estimated $42,000, and the catering reportedly cost $61,000. These included the mehendi ritual, where Chopra had henna applied to her hands and feet, and the musical sangeet ceremony, where the Chopra and Jonas families (including Joe Jonas’ fiancé, Game of Thrones star Sophie Turner!) sang and performed elaborate dances.
That adds up to a whopping $584,000, and that’s not including the dresses.
All in all, it was a weekend for the books. Up next for the clan is Joe Jonas’ wedding next summer in France. If the save-the-dates, which were sent out in calligraphed wooden boxes, are any indication, the Jonas-Chopras might have some competition on the extravagant wedding front. One can only hope it will be GoT-themed.
Refinery 29I saw a picture of an elaborately dressed elephant, at one of Mormon Church of Satan’s Marriott hotel websites, and now I can’t find the picture and also I had assumed that Marriott Elephant Hotel is in India but it’s not.  It’s upstate New York.

The Elephant Hotel is an historic former hotel which today serves as the town hall in Somers, in Westchester County, New York, United States. It was listed on the National Register of Historic Places (NRHP) on August 7, 1974 as Somers Town House and designated a National Historic Landmark in 2005 as Elephant Hotel.[1] It is also a contributing property in the NRHP-listed Somers Hamlet Historic District. It is located at 335 US 202, across from the northern end of NY 100.

Hachaliah Bailey (known as the creator of Bailey Circus) built the Elephant Hotel in Somers, NY, after buying an African elephant, which he named “Old Bet“. Bailey intended to use the elephant for farm work, but the number of people it attracted caused Bailey to tour her throughout the northeast. Old Bet was killed on tour in 1816, when she was shot by a local farmer.[2] Bailey’s tours were the first of their type in the nation, and inspired numerous others to tour with exotic animals, and during the 1830s the old style circus and Bailey’s attractions merged to form the modern circus. Due to this, Somers is known as the “Cradle of the American Circus”.[2]
Wikipedia [emphasis added] 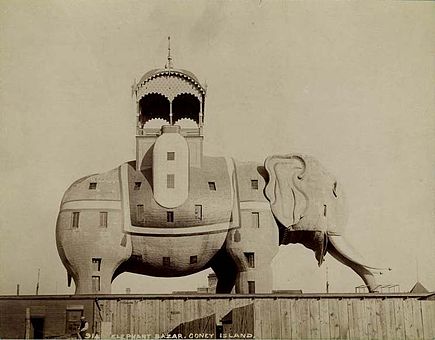 The Elephantine Colossus, otherwise known as the Colossal Elephant or the Elephant Colossus, or by its function as the Elephant Hotel, was a tourist attraction located on Coney Island in Brooklyn, New York City. It was built in the shape of an elephant, an example of novelty architecture. The seven story structure designed by James V. Lafferty stood above Surf Avenue and West 12th Street from 1885 until 1896, when it burnt down in a fire. During its lifespan, the thirty-one room building acted as a hotel, concert hall, and amusement bazaar. It was the second of three elephant buildings built by Lafferty, preceded by the extant Lucy the Elephant near Atlantic City and followed by The Light of Asia in Cape May.
Wikipedia

Do I think there’s more to Mormon Church of Satan’s new logo than meets the eye?
Yes.  That is exactly what I think!
And why would I think such a thing as that?
Because I’m a lunatic conspiracy nut, that’s why!
cc all Mormon barristers!!

I’m still praying to Jehovah God to please give me the strength to endure the sadistic EZ button laser beam super technology pain in my breast. I wrote in the post before this post that, during the middle of the night somebody stretched my panties and unclasped the barrette in my hair; I just a few minutes ago realized, the bottom of my bra is also stretched.  [Of course, it’s crazy of me to think that all of what is happening here (where, I cannot say) is being exposed, lunatic crazy of me.] I’m going to get dressed and go to CVS, to purchase some gauze, and to take a picture of Chase elephant next door to CVS, and then I’m going to Whole Foods which is closer than Stop & Shop, coming from taking the picture of the elephant.